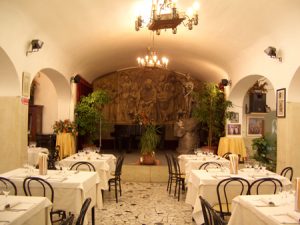 Parma is renown in the world for at least two reasons: good music and good food.

We decided to bring them together for the Conference dinner, on May 10th, which will take place in Corale Verdi.

Corale Verdi is one of the most popular restaurants in town; it owes its fame to its traditional menu full of local delicacies (hand made stuffed pasta, cold cuts…), but also to the strong connection to the town’s traditional appreciation for music.

Its name, that means Verdi’s Choir, is due to the fact that the restaurant it’s also the seat of an actual Choir: an estimated musical institution founded in 1905 and well known for its deep knowledge and love of Giuseppe Verdi’s works.

Walking beside the restaurant, it is not unusual to hear pleasant voices singing Opera arias!

Also, the great conductor Arturo Toscanini (1867-1957) used to live just a few metres away from the Corale, and his birthplace is now a museum.

The building – which dates back to the early 19th century, when it was a Ducal property – includes a shaded, confortable yard where people love to gather to spend evenings playing games and enjoying a drink.

The neighborhood of the restaurant is quite charming too: it lies right between the green meadows of Parco Ducale and the old district of Oltretorrente with its multi-coloured houses and lively, cozy alleys.

So, compiling your registration to the Conference, be sure to book also a ticket for the dinner, because good food and good music will be involved! 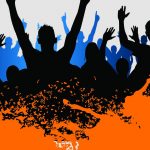 The Food Integrity 2017 social event is more than a dinner!
At about 11.00 pm, we will return back to the Starhotel for an unforgettable night.
Dj Davidino and his staff will create a fantastic atmosphere with lights, sounds and music: a party that you cannot miss and a good opportunity for chatting, drinking and… dancing.

The event is open to all the registered people, and the entrance is free.
For a couple of hours, forget the conference formalism: we want you on the dance floor.

Let the science move your body!